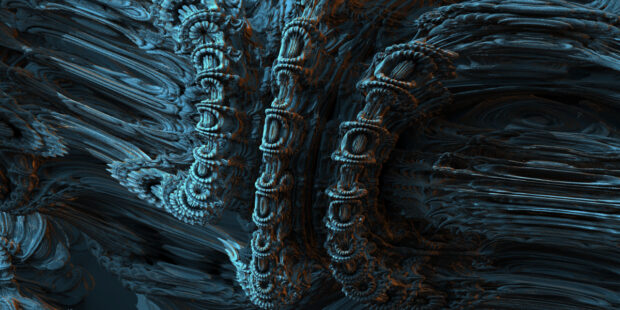 In previous posts, I wrote about the etherfield as the fifth fundamental interaction of nature in the Voidpunk Universe; about etherspace and the exchange of ether energy and gravitational energy; about etherpoints as entry and exit points into and from etherspace; and about etherpoint topography.

What’s been missing until now are etherstrands. Etherstrands are the actual pathways that are navigable by spaceships and connect Population I star systems across the Void. In my post on etherspace, I described them thus:

Etherspace has an asymptotically finite volume and an infinite surface area with a system of approximately self-similar pathways called etherstrands. Etherstrands, in turn, are based on solutions to complex polynomial fractals iterated in a complex vector space, and they come in an unknown number of groups and subgroups with distinct mathematical and physical properties. Not all of them are navigable by every ship, navigable at all, computable, or known.

In the final part of my first novel, that’s what I used; it’s more or less based on multidimensional Julia sets like the Mandelbox, but it wasn’t quite what I wanted. What I wanted for etherstrands was a three-dimensional Mandelbrot set; but you can’t just map the two-dimensional complex number space to three dimensions. (The existence of the etherfield with all its ramifications is that one thing that is different from the physics of our actual universe, and I want to keep it that way.) As I wanted to get my Advance Reading Copies out the door, I called it a day and did some mathematical hand-waving in the hope of finding a better model down the road.

And, lo and behold, there is one that’s a lot better suited for my purposes: Mandelbulbs! The current model is more than ten years old already, and I had managed to miss it. Thus, I’ll have to revise my etherstrand concept a bit and make traveling through it as interesting as possible (and, at times, as horrifying as possible) based on Mandelbulb math.

You can find some great visualizations here, with this outer and inner structure of a z → z^n + c Power 8 iteration among my favorites so far. The source for this post’s cover image is here.

Plus, an animated Mandelbulb has popped up in the wild recently that you definitely want to watch.