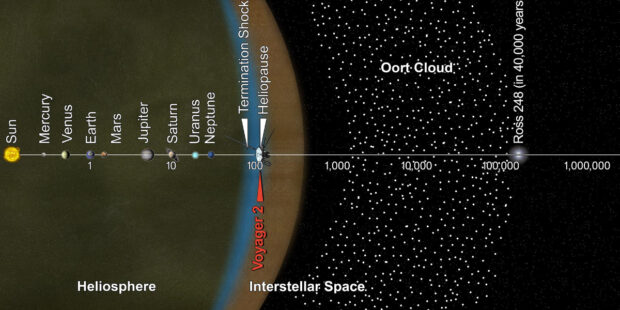 In my previous posts about the physics of the Voidpunk Universe, I introduced the etherfield as the fifth fundamental interaction (a.k.a. force) of nature that makes both interstellar travel and thaumaturgy possible, and etherspace as a navigable space with a system of approximately self-similar pathways called etherstrands that connect Popular I systems across the Void.

To get from three-dimensional space to etherspace, a spaceship has to cross through a system’s etherpoint. Etherpoints, in general, can be found in the vicinity of strong gravitational fields. With rare exceptions, every star system has one, and some cosmic objects and hazards as well. It’s the point were ether energy propagates from the bulk into three-dimensional space and gravitational energy propagates into the bulk.

The position of a star system’s etherpoint can be precisely calculated. Barring exotic setups, it’s located above the north ecliptic pole of the sun, whereby its distance depends on the sun’s mass, the star system’s radius, and a multiplier that is usually around 1, except in systems with planets that have both considerable mass and highly inclined orbits.

As spaceships can enter or exit etherspace only through an etherpoint, both the backbone of a star system’s logistic infrastructure and its most critical line of defense are naturally located near and around it.

But there’s another important aspect. From the etherpoint, ether energy propagates through the system at more or less uniform levels, but drops off sharply beyond the system’s effective gravitational range. This is usually marked by the end of the heliosphere as the system’s boundary, after which interstellar space begins. Now, as ethercoil drives convert ether energy to gravitational energy as primary means of propulsion, that limits the operational range of spaceships in three-dimensional space to interplanetary travel.