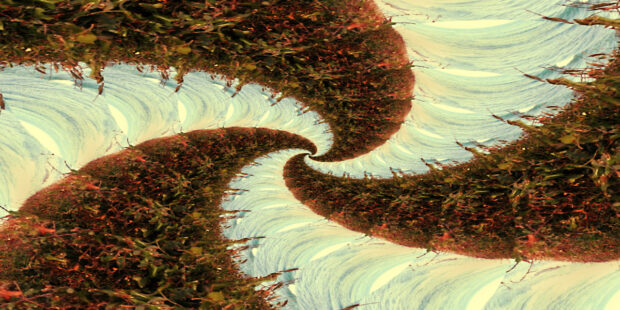 In my last post about the physics of the Voidpunk Universe, I introduced the etherfield as the fifth fundamental interaction (a.k.a. force) of nature that makes both interstellar travel and thaumaturgy possible. As a reminder: just as the gravitational force “leaks” into the brane (which is based on actual models like the Kaluza-Klein geometries in general and the Randall-Sundrum model in particular), the ether force leaks from the brane into our universe (which is purely fictional).

And on the “other side” of the brane, there’s etherspace. Etherspace has an asymptotically finite volume and an infinite surface area with a system of approximately self-similar pathways called etherstrands. Etherstrands, in turn, are based on solutions to complex polynomial fractals iterated in a complex vector space, and they come in an unknown number of groups and subgroups with distinct mathematical and physical properties. Not all of them are navigable by every ship, navigable at all, computable, or known. But don’t worry! You only need a deeper understanding of it if you’re a navigator! And even then you’ll be mostly using your ship’s visualization framework, and you’ll let your ship make most of the calculations for you in any case.

Now, as you’ve certainly already expected, these etherstrands connect Popular I star systems across the Void. But, and that’s perhaps the most important part besides interstellar travel as such, the positions of star systems in etherspace are either entirely uncorrelated with their positions in three-dimensional space, or correlated in ways that entrarchic scientists haven’t yet understood.

This makes life and travel in the Void even more interesting than it already is. But wait, there’s more! It preempts some of the colorful problems you run into when you introduce faster-than-light travel into your universe.

Because what makes entrarchic scientists think there’s a hidden correlation is the fact that star systems close to each other in etherspace seem never even remotely close to each other in three-dimensional space. Thus, if that’s indeed the case, and within reasonable limits of means of perception, there will never be an observer who can simultaneously witness both the take-off and the arrival of a spaceship with the latter preceding the former. If true, it would make the rule behind it a cousin of the weak cosmic censorship hypothesis.