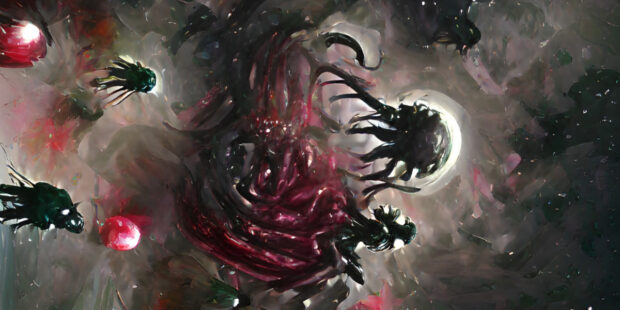 To recap, there were two known exoentity incursions: the first incursion one billion years ago that rang in the end of the Artifact Age, and the second incursion twelve thousand years ago that spelled the end of the human Federation Age. The latter lasted for around two thousand years, the former for a million years. The question is, why did the first war last so much longer than the second?

It’s a question that has puzzled entrarchic scientists for a long time. One reason, probably, was the composition of combatants. During the Federation Age, there were only humans to fight the invading exoentities, and it was always a minority of them who fought on the side of the invaders. During the Artifact Age, the dynamics were different. There, numerous powerful civilizations who had already been at war with each other, at least sporadically, either fought on the side of the gods or against them, with the tide turning repeatedly.

Another reason might have been the number of invaders. It’s far from clear how many exoentities breached the stellar population boundary during the Federation Age war. Yet, evidence has accumulated recently that it might have been not more than three, not counting less powerful creatures they brought with them or created on the go. It could well be that more gods than that invaded during the Artifact Age.

A third reason might have been that the Artifact Age war didn’t rage all the time; perhaps the gods were even temporarily defeated now and again but returned with the help of their allies. That apparently didn’t happen during the Federation Age war.

Some entrarchic scientists, however, propose that there are portents for the return of the gods, and that humanity might actually be fighting a million year war without knowing it yet. According to this hypothesis, the defeat of the gods, the end of the Federation Age, and the ten-thousand years of the Dark Ages that followed had merely been the prelude to the first act of this second war.