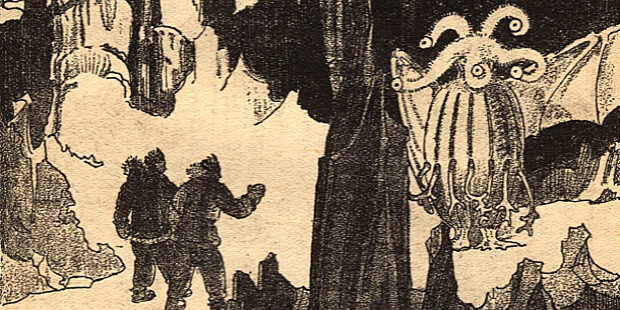 Besides gods, several ancient civilizations populate the universe of the Mythos Circle. Some have names, like the Mi-Go, but most of them remain vague, like “The Deep Ones” or “The Elder Things” and similar. This vagueness is, of course, intended—it’s substantially more menacing when you never really know what you’re dealing with.

As the Voidpunk Universe is not pure horror but a science fiction-horror hybrid, I can’t just leave it at that. But I try to keep it reasonably obscure. These civilizations existed a billion years before current time (yet firmly in Population I space, mind). Back then, these so-called Artifact Age civilizations fought a million-year war for or against invading exoentities, and even though they succeeded in driving the invaders back into their native realm, these civilizations collapsed soon after. They left behind remnants and artifacts, scattered across the Void, that are investigated by Entrarchic scientists. (Which often spells trouble.)

Hence, these Artifact Age civilizations have more concrete names in the Voidpunk Universe, e.g., “The Muralists.” But these are names attached to them by Entrarchic scientists, while knowledge about them remains scant. There are indications that scientists from the human Federation Age civilization twelve thousand years ago had found out more; but after their own two-thousand-year war to beat back the second known exoentity incursion, much of that information was lost when this civilization collapsed in the aftermath as well.

Along the storylines in the Voidpunk Universe, more will certainly be revealed over time. But in the pen-&-paper role-playing game I’m also working on, nothing will keep you from playing an Entrarchic scientist and make some momentous discoveries on your own!