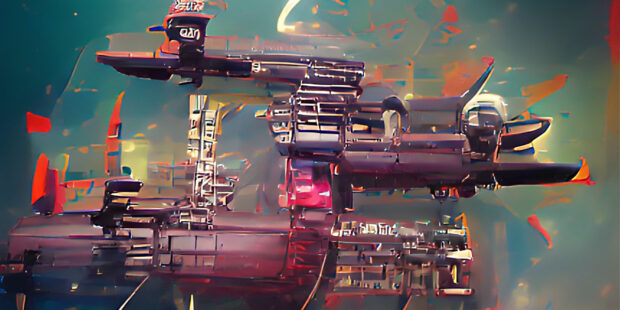 In the Voidpunk Universe, there are three distinct ages in Population I space with distinct civilizations. The first were the so-called Artifact Age civilizations that thrived one billion years ago. They fought a million-year war for and against invading exoentities, or gods; and while the gods were eventually defeated, all the great Artifact Age civilizations collapsed in the war’s long, drawn-out aftermath, with ongoing hostilities among themselves. This period is estimated to have lasted another million years.

Then, about twelve thousand years ago, human species had spread out among the stars. They didn’t yet call the universe the Void; but they did wonder why they never encountered other civilizations, only their remnants and artifacts. It was then that the second known exoentity invasion occurred. The gods were driven back to their native realm in Population II space after a mere two thousand years. But the war between human factions—who either had fought or supported the gods—seemed to have raged on, repeating what had happened toward the end of the Artifact Age. The human Federation Age civilization eventually collapsed as well, around ten thousand years ago.

Even though the Void is littered with remnants and masses of recorded data from the Federation Age, entrarchic scientists still have a hard time figuring out what really happened, how people lived, what they thought, and how they managed to fight back the invading exoentities within two millennia—an incredibly short time compared to the million-year struggle of the mighty Artifact Age civilizations a billion years ago.

Thus, in the Voidpunk Universe, you can hunt artifacts and data sources on several levels, either as a scientist or an artifact hunter. Whatever you find, it might tell you something new about the Artifact Age, about the Federation Age, or about what the Federation Age already knew about the Artifact Age that was lost in the collapse. You might become famous if you’re an entrarchic scientist, or you might strike it rich if you’re an artifact hunter. But in the latter case, you might also paint a huge target on your back while trying to cash in on your lucky find.