The Third Rule of Space Combat 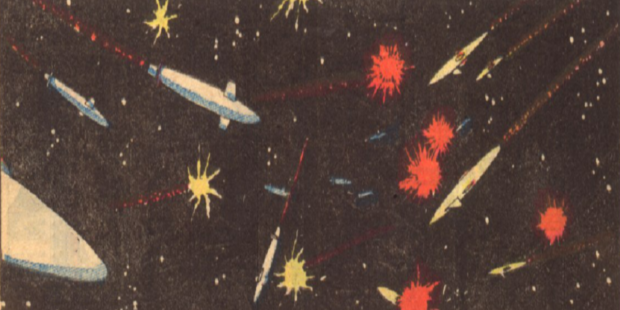 The Third Rule of Space Combat

The third rule of space combat in the Voidpunk Universe is: There Are No Dogfights.

Spaceships can be fast or slow, but that doesn’t depend on size—small spaceships aren’t “fast” because they’re sleek and small, and large spaceships aren’t “slow” because they’re large and bulky. Yes there’s the propulsion-to-mass ratio, how fast a ship’s available power output can overcome its inertia. But larger ships with more mass also have more muscular engines and more potent power sources that pack a better punch. What’s more, if you cut your engines, your spaceship will follow its current velocity, not decelerate, and if you keep ’em engines running, it will further accelerate, not “hold” its current speed.

Spaceships are neither water vessels nor aircraft. Space is different! There is no medium that could affect moving objects as a function of their form, size, or orientation. Thus, there’s no “banking,” no “stall,” no “tail,” no “yo-yo.” Spaceships are no more fighter jets than they are naval vessels.

Finally, neither cockpits nor screens make any sense for space combat. You wouldn’t rely on eyesight when you navigate a spaceship or shoot at a target.

In the Voidpunk space combat system, engagements are long, drawn-out, complicated, brutal affairs, conducted by dedicated operational systems (AI, but not AGI) that act either by themselves or together with hooked-in crew members. These could be players, provided they meet the required proficiency levels.

About how role-playing works in space combat situations, that’ll be the topic of a future post.