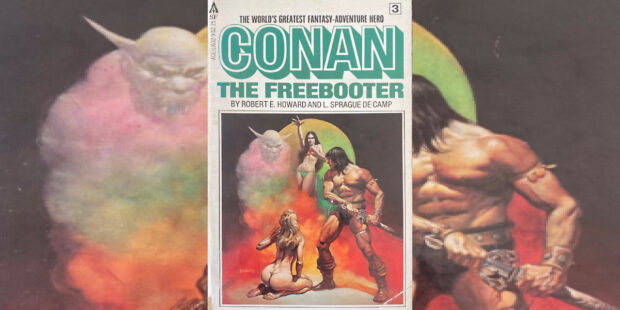 This was the third story collection of Conan’s adventures by Lancer, 1968, of which I own a 1977 Ace reprint. (It’s confusing: while the Lancer edition pressed Conan’s adventures into a biographical timeline Howard explicitly didn’t intend, the paperbacks’ actual publication dates are a complete mess.)

This cover art by Boris Vallejo was used for later Ace reprints. Both the original Lancer edition and the first Ace reprint, in contrast, featured cover art by John Duillo. It’s…well. Click and see for yourself.

As for its content, this volume is nothing short of atrocious. It’s even worse than the first two volumes, Conan and Conan of Cimmeria, as the writing credits are wildly misleading this time.

“Black Colossus” and “A Witch Shall Be Born” are solely credited to Robert E. Howard, but both stories are actually edited/altered by de Camp.

That leaves “Shadows in the Moonlight” as the only original, untampered-with Conan story in this volume.

It always amazes me how this was allowed to see the light of day, let alone become the popular go-to edition for Robert E. Howard’s Conan stories.