The Lancer Edition of Conan 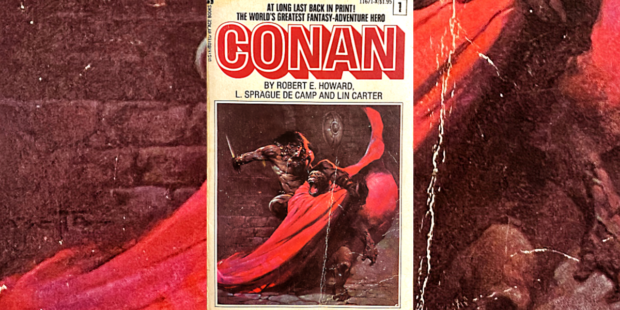 The Lancer Edition of Conan

Imagine Tolkien’s Lord of the Rings trilogy hadn’t been edited and published by Allen & Unwin in 1954–55, but in the 1980s by two younger fantasy authors, who had rearranged Tolkien’s story lines, heavily edited his original text, and inserted additional plots, characters, and “clarifications” on Frodo’s biography. Unimaginable? Well, that’s what happened to the first, and still most widely reprinted, collection of Robert E. Howard’s Conan stories.

The featured image is my copy of Conan, a 1977 Ace reprint of Lancer’s first volume of Conan stories, originally published in 1967. The cover artist, of course, is Frank Frazetta.

Now if you asked me about my favorite antagonists across all of Robert E. Howard’s Conan stories, I’d say it’s L. Sprague de Camp and Lin Carter.

In this first story collection, as edited by these two, you’ll find Howard’s original stories “The Tower of the Elephant” and “Rogues in the House.” That’s it! All other stories are either written—“The Thing in the Crypt” and “The City of Skulls”; “edited”—“The God in the Bowl”; or “finished”—“The Hall of the Dead” and “The Hand of Nergal”—by de Camp and Carter. And it gets worse. To add insult to injury, all the stories were forced into a pseudo-biographical sequence that Howard explicitly didn’t intend, glued to each other by made-up “biographical” vignettes.

Thus, while the paperbacks from the Lancer edition with Frazetta’s cover art are certainly classics, they’re not the editions you want to read. Instead, treat yourself to this three-volume edition I wrote about earlier. There, you’ll find Howard’s original Conan stories in the way and the order as they were written. (But, as some of them were initially rejected, not necessarily in the order they were originally published in pulp magazines in the 1930s.)