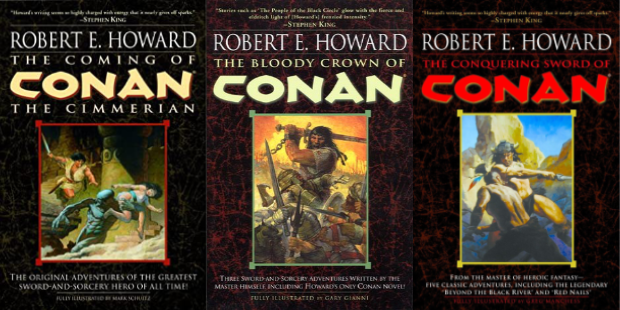 As my Voidpunk Universe is deeply rooted in Pulp, many posts to come will be about Pulp, this being the first. Some of those will be crossposts from my voidpunkverse Instagram account, but with more weight on the commentary than on the pictures. However, to have pictures at all, I have installed a slideshow plugin and a CSS link marker—so whenever you see a link with this slider icon, you can click on it, the image will pop up in an overlay, and you won’t be leaving the post.

What has kept generations of readers puzzled was the sequence in which one should read Howard’s Conan stories. Many, like me, read them in the classic Lancer edition, originals or reprints, as edited by L. Sprague de Camp and Lin Carter. Now, while you can safely regard these paperbacks as “classics,” they were really terrible in several respects. First of all, the Lancer edition forced Howard’s stories into a pseudo-biographical sequence never intended by Howard. Then, de Camp and Carter rewrote Howard’s unfinished or discarded fragments and non-Conan stories into Conan stories. Also, they threw their own stories into the mix. Finally, they made it a habit to “improve” upon Howard’s style in his own stories with more than dubious results.

So yes, I still got my Lancer edition (mostly Ace reprints), and I have no plans to part with them. They’re classics, after all! But if you want to read Howard’s original Conan stories the way Howard wrote them, and in the sequence he wrote them, then there’s this fantastic edition I wholeheartedly recommend:

This three-volume edition is edited by Patrice Louinet, who also wrote the introduction and the afterword, and is illustrated by Gregory Manchess. It restores Howard’s Conan stories both regarding the sequence in which they were written, and how they were originally written by Howard. Why might the original sequence be important? Here’s a beautiful passage from Howard himself, as quoted by Patrice Louinet in his introduction:

In writing these yarns I’ve always felt less as creating them than as if I were simply chronicling his adventures as he told them to me. That’s why they skip about so much, without following a regular order. The average adventurer, telling tales of a wild life at random, seldom follows any ordered plan, but narrates episodes widely separated by space and years, as they occur to him.

If you want to read or re-read Robert E. Howard’s Conan stories as they were meant to be read, this is the edition for you.