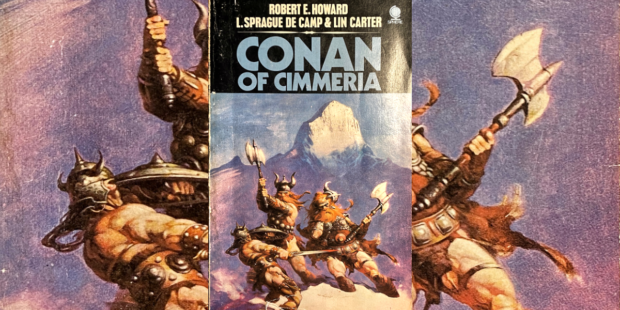 This was the second story collection of Conan’s adventures by Lancer, 1969, of which I own a 1974 Sphere variant. Cover artist Frank Frazetta.

Again, as with the first volume, it’s chock-full of editorial atrocities. Again, the stories are pressed into a fictitious biography made up by de Camp and Carter that Howard explicitly didn’t intend. Again, it contains only two original Conan stories, “Queen of the Black Coast” and “The Vale of Lost Women.”

“The Blood-Stained God” is written by de Camp, based on an unpublished Kirby O’Donnell story. “The Frost Giant’s Daughter” is based on Howard’s manuscript, but extensively rewritten by de Camp. “The Snout in the Dark” is a story fragment completed by de Camp and Carter.

The remaining three stories—“The Curse of the Monolith”; “The Lair of the Ice Worm”; and “The Castle of Terror”—are all written by de Camp and Carter.