A Deep Field Into Doom 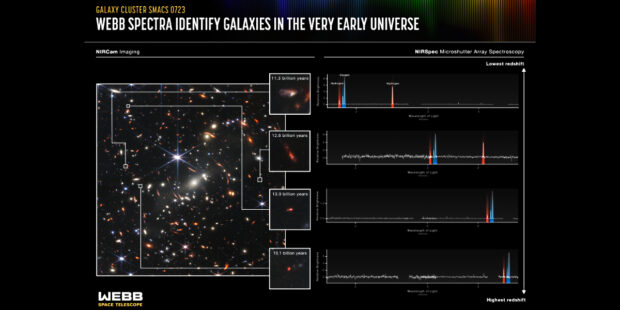 A Deep Field Into Doom

One of the breathtaking shots circulating from NASA’s new wonderful space telescope, or NWST, is the galaxy cluster SMACS J0723. The cluster itself isn’t that old or that far away; we see it as it appeared a mere 4.6 billion years ago. But the redshifts imply objects in the background that are around 13.1 billion years old. That’s… pretty early! (For your daily science digest, the actual distance now between us and these objects at such distances is in the 40+ billion light-years range, thanks to the expanding universe.)

A while ago, I wrote about Stellar Populations in the Voidpunk Universe. As a refresher, there seem to be three stellar populations, Pop.III, II, and I, separated by different generations of supernovae that created more and more chemical elements until life as we know it became possible with Population I stars (where we live and pulverize our planet right now).

Thus, if exoentities were as big as galaxies (and maybe there’s one or two who are!), they might even show up on our telescopes some day!

What’s still unclear, in actual science, is where Population II space ends and Population III space begins. For the latter, these would be the first stars that formed from the interstellar gas clouds that emerged shortly after the big bang, but none have been observed so far. That, of course, could change with NASA’s NWST, but it’s not a given. It could well be that Pop.III stars had a lot of mass, like, really a lot, and turned into neutron stars and black holes within a fairly short time.

In the Voidpunk Universe, Pop.III objects have been observed, but what’s exactly going on in that space is still a mystery. Depending on interpretation, Population III space might hold things that even the ancient, powerful gods have to fear.