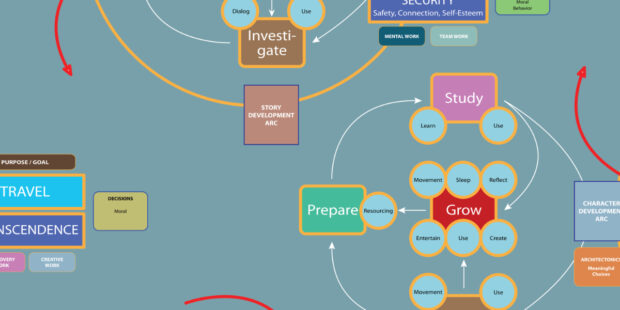 Actually, I had several sets of first thoughts about a Voidpunk indie game already, since around April/May last year. Also, buried in some blog post or newsletter or both, I might have mentioned lately that I’m contemplating a proof-of-concept for that in 2024. Not a prototype, mind—I won’t have the resources for that. Just something I can cobble together in Lua, and maybe some action stuff in id Tech 4, to see where it takes me.

This year, I’ll still be busy editing my texbook for its second edition, writing my second novel, and finding an agent for the first, and next year I want to wrap up the pen-&-paper RPG. So it’s not that I wouldn’t know what to do with my time! And if I’ve found an agent by then, I’ll probably want to start writing the next novel right away.

So what could such a Voidpunk game be “about?” Following first thoughts, the protagonist would be an artifact hunter, so the game would nominally be about finding an artifact. But at its core, the game should be introspective, with enough travel time between locations to give the player room to contemplate the decisions they made and the ramifications, and what kind of person they want to be. Along several course topics from my CGL lectures, I even sketched a preliminary game loop and some social (NPC) stuff, but all that’s clearly premature. I really have to start from scratch and go by the book.

Including entire websites, I’ve always developed everything more or less in the open. Thus, it would be fun to post any progress I make along my own methodologies. I once did that for fun with a game about Hanukkah, over eight days of Hanukkah, of course. But that was a purely abstract thought experiment. Now I wonder how it would be if I did the same thing for a game I actually want to make!