A Bridge to Burn 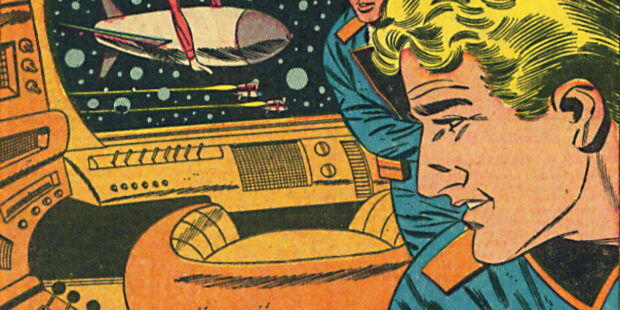 A Bridge to Burn

As mentioned in previous posts and the Setting section of this here homepage, there are three distinct periods in the Voidpunk universe: the Artifact Age one billion years ago, the Federation Age ten thousand years ago, and the current period of the Entrarchic Age.

In the Entrarchic Age, space ships don’t have bridges, or anything resembling twentieth century naval architecture. The crew is “nested,” i.e., they reside in neural synchronization terminals, called NeSTs, through which they directly connect to the ship. (Also, ships merely have abstract identifiers—giving them names would strike humans of the Entrarchic Age as absurd as giving names to cars or washing machines would appear to us today.) While NeSTs might not work well for movies, they work great for written fiction and tabletop role-playing.

Now, the challenge is how to handle spaceship crews in the Federation Age. On the one hand, there’s a good argument to make that in a technologically highly developed near-future, we wouldn’t build spaceships with bridges and corridors and machine rooms like naval vessel. Would spaceship crews, particularly during hostile engagements, sit in comfortable chairs in a spacious room and look at a gigantic display? This sounds impractical, to say the least. Also, there’s a good chance that we will have developed neurotech far enough by then so that crews could manage their ships with some kind of NeST predecessor. On the other hand, I might one day want to have a shot at writing RPG adventures, short stories, or even a novel set in the Federation Age—where, for dramatic/narrative reasons, technologies should be markedly different, not just earlier versions of entrarchic technologies.

So that’s one of the design challenges I’m working on. I’d certainly not settle with twentieth-century naval design; but to prevent myself from giving up and using a Federation Age version of NeSTs, I’ve deliberately burned that bridge already by making clear in my books that NeSTs, as a pervasive technology in the Entrarchic Age, are relatively recent. Thus, something different must have preceded it.