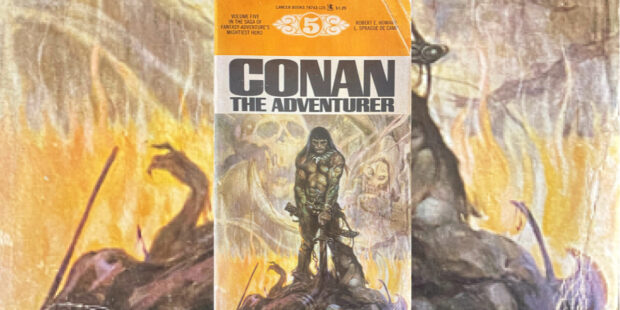 Even though the road is rough and rocky, we have to go on! Our next stop is the (sort of) fifth volume of Lancer’s Conan edition, Conan the Adventurer. It appeared in 1966, two years before the fourth volume, because counting isn’t what Lancer was good at either. Actually, it was the very first published volume of the series! The cover art is by Frank Frazetta, which was also used for later Ace and Sphere reprints. I own an undated 1973 Lancer reprint, with a different cover layout and slightly cropped artwork.

This collection is actually three-quarters decent, maybe owing to the fact that it’s the first published book in the series, and de Camp hadn’t yet gotten around to anointing himself as Howard’s senior collaborator.

Three out of the volume’s four novelettes—“The People of the Black Circle,” “The Slithering Shadow,” and “The Pool of the Black One”—appear more or less unchanged. “The People of the Black Circle” is identical to Howard’s original version in Weird Tales. It’s not identical to the manuscript version, though, as the magazine’s editor, Farnsworth Wright, had made some changes. The manuscript version was first published in Del Rey’s collection The Bloody Crown of Conan in 2004. “The Slithering Shadow” remains essentially unchanged and also retains the title of its first publication. Howard’s manuscript’s title was “Xuthal of the Dusk,” under which the story first appeared in Del Rey’s The Coming of Conan the Cimmerian in 2003. The text of “The Pool of the Black One,” finally, is also identical to its first publication in Weird Tales.

The odd one out is “Drums of Tombalku.” Here, Howard left only an untitled outline/synopsis and an untitled rough draft of the first half of the story, which was then “completed” by de Camp for the Lancer edition. (There seems to exist a different edit by Stephen Jones that appeared in Gollancz UK’s The Conan Chronicles Vol.1: The People of the Black Circle in 2000, but I haven’t read it yet.) The story’s original, unedited draft and synopsis first appeared in Ballantine’s The Bloody Crown of Conan in 2003.

Now, what about de Camp’s “completion” of this story, or novelette? It doesn’t pack the punch it deserves, to say the least, and de Camp took the ending in a direction that was clearly not intended by Howard’s synopsis. Also—and explicitly—not intended by Howard, as a reminder, was all this chronology nonsense injected by de Camp, whose timeline vignettes sit above all four novelettes like dog turds.