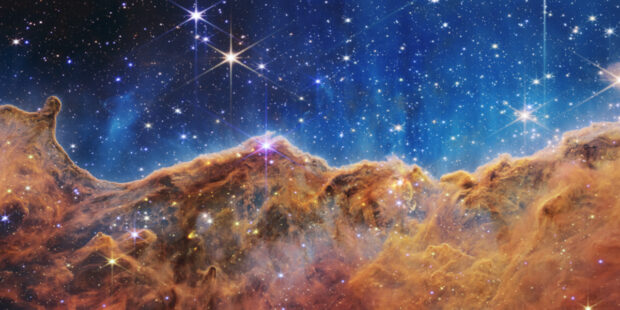 NASA’s new wonderful space telescope, or NWST, keeps delivering stuff. The header image is a section of NGC 3324, an open cluster northwest of the NGC 3372 Carina Nebula. It’s one of the most massive star-forming regions in our galaxy, and it’s called the “Cosmic Cliffs” because it looks like “craggy mountains on a moonlit evening” (NGC-3324 full image). These cliffs’ tallest peaks are seven light-years high!

Hot, supermassive young stars sit at the center, who carved out this “gaseous cavity” with intense ultraviolet radiation and stellar winds during the last 12 million years. As mentioned in previous posts, Stellar Populations are an important part of the setting in my Voidpunk Universe. At 12 million years, NGC 3324 falls squarely into Pop I (which stretches back to about two billion years). Thus, too young for exoentities, or gods!

Alas, too young even for my Artifact civilizations, who lived around one billion years ago. It would have been a good fit as a dwelling ground for the “Muralists,” as Entrarchic researchers call them in the Voidpunk Universe. If you’re a Mythos aficionado, you can certainly guess which civilization from the original Mythos they represent, particularly in the context of these Cosmic Cliffs of Madness!