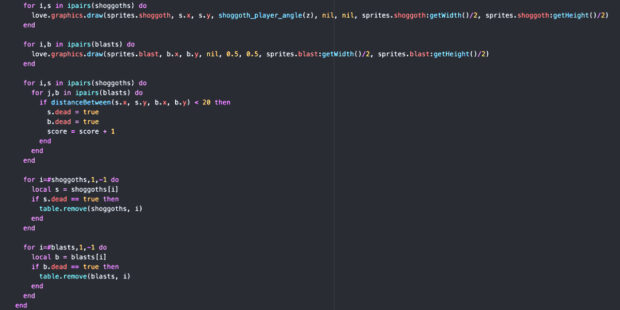 While I did manage not to work and write during my staycation, I checked out a few game engines for the proof-of-concept I want to cobble together in 2024. Unity’s a no-go—I always actively disliked it for various reasons, and I’m not surprised a bit that it’s become a raging trash fire lately (about which I wrote at my blog between drafts and twice at my secret level just drafts). Unreal is fine in principle, but I lost touch with it after they scrapped UnrealScript around 2014.

Also, while both Unity’s and Epic’s licensing models aren’t too onerous, I’d rather opt for an open-source engine. Which, then, also ruled out the CryEngine. As the CryEngine is built around C++ and Lua, it would actually qualify as my dream engine—but its licensing model is a lot more onerous than Unity’s or Unreal’s.

Thus, I first checked ID Tech 4 and followed the community’s Discord channel for a while. I decided against it eventually—it’s a mess in so many ways, and it has a rather restrictive GNU GPL on top that is a reliable headache generator if you want to amend shortcomings with your own or some else’s proprietary code.

Then, before I could check anything else, practically everybody I talked to recommended Godot, a free open-source engine under a MIT license with a huge, growing community. It looks great, so I guess I’ll go for it. Sadly, it doesn’t support Lua at this point in time, and the only project I could find for a Lua implementation looks all but abandoned.

Also, there’s no parser as yet with which to import Ren’Py code, which is a downside as well—even though it’s based on Python, of which I’ve only the faintest idea, one important segment of my proof-of-concept would still be a breeze to build in Ren’Py and a pain in the ass to build in Godot. That, of course, is a problem I’d have with any engine.

Well. Maybe by 2024, solutions to these challenges have emerged. Fingers crossed.