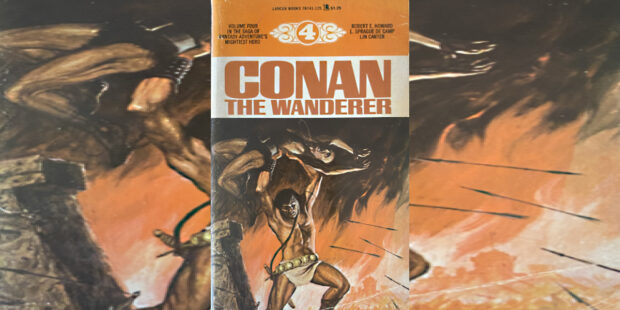 Let’s proceed on our scenic journey along the blazing train wrecks of Lancer’s Conan edition. The fourth volume, Conan the Wanderer, appeared in 1968, of which I own Lancer’s 2nd edition from 1971; it has a different cover layout, but John Duillo’s original illustration. (Later Ace reprints featured cover art by Boris Vallejo instead.)

The volume contains three novelettes and one novella: “Black Tears”; “Shadows in Zamboula”; “The Devil in Iron”; and “The Flame Knife.” Let’s look at them in detail.

Then, surprisingly, “Shadows in Zamboula” and “The Devil in Iron” are not only written by Robert E. Howard—de Camp left both novelettes alone! (I checked.) The former’s original title “The Man-Eaters of Zamboula” had already been changed to “Shadows in Zamboula” for its first publication in Weird Tales, Vol.26 No.5, November 1935; the latter first appeared in that exact form in Weird Tales Vol.24 No.2, August 1934.

Thus, from 222 pages overall in this volume, 76 are actually written by Robert E. Howard. Compared to the first three volumes, that’s an amazingly high number, almost worth celebrating.