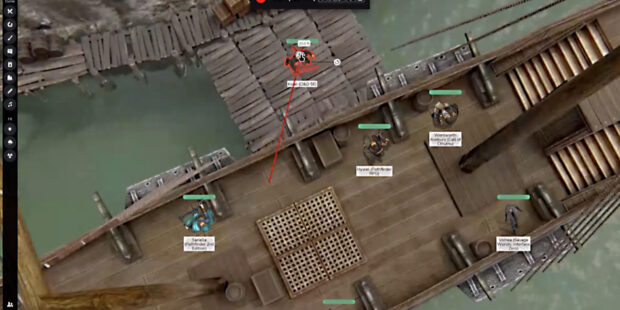 In my most recent Sunday newsletter, I wrote about the Voidpunk pen-&-paper RPG I’m working on, and why I don’t think that a print edition will make a lot of sense. But there’s another thing I had to decide upon sooner or later, which is possible support for virtual tabletop software, or VTTs. Last weekend, finally, I made myself familiar with Astral and Foundry.

On the one hand, they’re both terrific, and they’re also well-differentiated through their respective business models and features. Both give you powerful tools to create immersive campaigns and make your life as a game master a lot easier through automated actions and dice rolls.

On the other hand, they’re not pen-&-paper/tabletop RPGs. They’re video games! You create maps, a.k.a. levels, put player characters, NPCs, enemies, and assets into it, and watch the game from above or isometrically, with unique perspectives and occluded parts of the map for each player, and so on. You can also throw in lighting and weather effects and all kinds of bells and whistles. What you can’t do, though, is role-playing.

From the player’s perspective, you don’t experience the world through your mind’s eye at all. You merely see the world of the map, not the rich, fully realized world that’s supposed to unfold behind your eyes. You don’t experience the player characters and non-player characters in that world the way the players or the game master present them, what they do and how they do it. All you see are cartoon characters shuffling across the map, making tactical decisions. Certainly, tactical maps are used for physical role-playing sessions too—but the more prominent and detailed these maps become, the more these session will turn into board games.

Finally, even if you were a level designer instead of a game master, able to create the most terrific maps, these maps could not but put your party on rails. If you have prepared a map, or a set of maps, how could your players deviate from that path? What if they’re on a ship moored to a wharf, and you have a terrific map for that, and one of the players wants to swim over to another ship, bribe the guards, and climb the mast for a shooting position that suits their longbow? Even the best laid-out level will accommodate only so many player actions, and it will mostly accommodate those player actions that aren’t overly imaginative. Actions, in other words, that you have not only foreseen, but felt likely enough to justify investing time and resources to accommodate them in the first place.

Thus, I decided not to support VTTs beyond, perhaps, a scripted character template. Instead, I will try to think of ways to make it easy and enjoyable to play fully or partly online, and to support what makes true role-playing games shine: to stimulate and expand your players’ creativity and imagination.