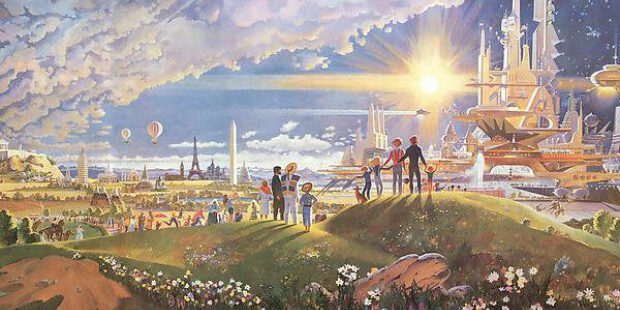 Yes, Gernsback’s a problematic figure. But Amazing Stories was the first magazine fully dedicated to science fiction, or “scientifiction,” as he preferred to call it. The first issue’s “work horses” were Jules Verne and H. G. Wells, accomplished 19th century novelists, and Edgar Allan Poe—no pulp fiction writers, by any means! And in his introduction to Verne’s story “Off on a Comet,” Gernsback goes out of his way to excuse Verne’s “unscientific” setting kicking off a “scientifically grounded” story.

Now, while I had been familiar with some ugly problems in science fiction & fantasy during the “Gernsback Era,” I hadn’t yet realized how white our retro-futuristic utopias really were until William Gibson’s short story “The Gernsback Continuum” was published in Universe 11 in hardcover and paperback format, edited by Terry Carr (Doubleday June 1981 and Zebra Books January 1983 respectively). If you’re not familiar with Gibson’s story, it’s about an American photographer capturing futuristic architecture of the 1930s on film, and he is haunted by visions of an alternative America of Streamline Moderne air cars, multi-lane highways, and giant zeppelins—populated by distinctly white “Aryan” people, where the vistas of the “Golden Age” of Pulp and Science Fiction turn into a perfect, and perfectly fascist, utopia.

A few years ago, for my presentation “Vertical Visions: The Aesthetic Dynamics of a Future That Never Was” at the Kunstverein NRW, one thing I did was juxtaposing the Gernsback Continuum’s white utopia and Robert McCall’s fantastic mural “The Prologue and the Promise”—the latter as a diverse, inclusive utopia that we all should aspire to.

Here’s a full high-res image of this mural (might take a moment to load), and here’s a shot of the mural with McCall sitting in front of it, so you can get an idea of its size.