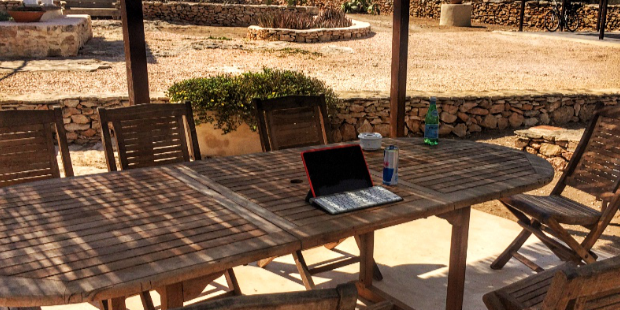 As mentioned in my first blog post, I began to develop the Voidpunk Universe in Spring 2015. But it wasn’t before September 2016 that I sat down and wrote the first novel’s first episode’s first paragraph.

It was a perfect time to start.

With a merry group of about ten friends and colleagues, we’d rented a finca for a couple weeks on the small Mediterranean island of Formentera for a late summer vacation. In the afternoon, we would go to the beach; in the evening, we would go out for the night or have a BBQ party at home. Temperatures hovered around and above 90 °F, the exact spot where I slowly become productive (and even hyperactive with a few more degrees thrown in). Thus, in the morning, I would go to our “pool office” and write, sustained by a steady supply of ice-cold drinks from our well-stocked refrigerator.

I still wasn’t sure if my concept would hold—particularly if my story ideas and their pulp underpinnings would get along well, without one drowning out the other. A lot was at stake, after all. As mentioned in my blog post “Why Not Start With a Voidpunk Video Game?” over at between drafts, my plan had been all along to fade out or cut off all freelance writing gigs and guest lecture jobs (with one valuable and enjoyable exception) to focus on my Voidpunk Universe and its various creative projects. So I’d better be sure my concept worked out!

Back in 2016, at our Formentera pool office, I started putting it to the test. And the sheer joy I experienced, finally writing the stuff I wanted to write, was a damn good sign. A few more years went by, full of other projects, breaks, and distractions. But by the end of 2020, everything had taken shape—the setting, the novel, its follow-ups, the role-playing game, and more. Everything looked good, and early in 2021, I jumped.